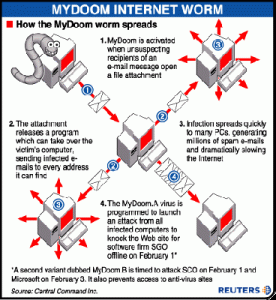 Many of the most destructive viruses are hatched via unknown email spread. The infamous “MyDoom” virus was spread this way, and caused almost $40 billion in damages. It is also believed that this virus had the ability to infiltrate other programs as well, which made completely removing the virus a tedious and nearly impossible task. It also opened up your computer to be able to be accessed by others . It was spread by creating a fake ’email was not sent properly’ sort of message. Once it was opened, it sent itself to every contact that it could find, which made it very harmful, and very quick moving.

Another virus that caused almost as much damage as MyDoom is the SoBig Virus. This was a tricky little virus, seeing as it was able to continually evolve. This virus was also contracted via email, and was able to replicate itself, was a trojan, but was also able to disguise itself as though it wasn’t. Many viruses such as these have the ability to not only slow down your computer and make your computer time an annoyance, but can hack into your machine, log your keystrokes and even electronically steal your money.

There are numerous other viruses that have caused similar amounts of damage as these two. The lesson from this though, if you have a virus, take care of it ASAP. There is much more at risk than just your computer. If you think you may have a virus on your computer, and can’t get it handled immediately, avoid using the computer all together, or at least do not access any important information you wouldn’t want a hacker knowing.