Many companies are upgrading computer systems every couple of years these days and a lot of times those companies rely on outside contractors to complete the work that is needed for the upgrade.  IT companies are located all over the country and are very similar when it comes to the services that they will provide for you.  In the Orlando area, you have NetComplete that can provide the managed services that you need.  Services like repair, cloud, BDR and phone management for your company.  You do not have to be a Fortune 500 company to outsource the services that NetComplete can provide for you.  The company works with large and small businesses a like in the Orlando, Florida area.  NetComplete was founded back in 1996 and has the vision of helping business with all of the technology needs as we move through the 21st century. END_OF_DOCUMENT_TOKEN_TO_BE_REPLACED

Getting on the internet is easier than it has ever been before.  Smartphones, tablets, laptops, watches and even some cars can get access to the internet.  Usually when something is this easy to access, bad things can come from it.  Starting with the very first virus back in the day, hackers and other criminals have been trying to find ways to gain access to information that is otherwise restricted to the public.  Retail stores are getting hit with viruses that can read through customer information, including credit cards, social security numbers and addresses.  Other viruses are just put online to close down websites as part of a political activist prank, but all in all, anything connected to the internet can be affected in some way.  This year, the Hearthbleed bug brought the internet to a halt and even though website claim issues have been fixed, many believe otherwise. END_OF_DOCUMENT_TOKEN_TO_BE_REPLACED

Digital data security has been a matter of great concern since its evolution. Especially when your computers stores personal information and financial transaction details via Internet, a computer security system is critical. Passwords were the much older option that had proven to be ineffective in hands of hackers.

The reliable and effective modern technology to protect your personal data is encryption. Encrypting your information is a bit like keeping it in a locked safe. Only those who have a key or know the lock’s combination can access it. Legally, you are personally and fiscally responsible for any information disclosure from your computer or mobile devices, whether accidental or not. By protecting the entire contents of your machine and your files in general from unauthorized viewing through a strong encryption program, you can secure your computer from data disclosure even if it falls into the hands of people you don’t want knowing your personal information. END_OF_DOCUMENT_TOKEN_TO_BE_REPLACED

There are many things that you ultimately want to consider when thinking about choosing an IT company. The best experience comes from doing business with a company who will give you personal treatment and shares your commitment to a job well done.

Many IT companies outsource their technical support. When taking the time to consider which IT company you want to choose for your business, you are going to want a company that can guarantee that a real person is there to answer your phone call every time. This is one of the distinct advantages of choosing a small business to do your IT work. Many big businesses have no choice but to outsource or automate their technical support. END_OF_DOCUMENT_TOKEN_TO_BE_REPLACED

We are now offering Complete-Sync, a cloud based storage system for small to medium sized business that is breaking barriers with its security, storage space, and ease of use. Complete-sync provides an easy way for your business to share and sync important data across multiple platforms, while keeping security a top priority. The dashboard allows administrators to keep strict policies based on your organization’s needs. END_OF_DOCUMENT_TOKEN_TO_BE_REPLACED 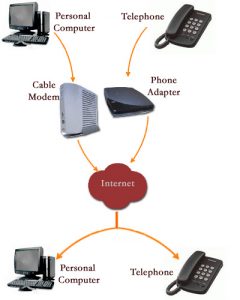 If you are not familiar at all with VoIP phone services, prepare to have your mind blown. Chances are you have already interacted with a VoIP phone, or have held a conversation with someone who has. VoIP stands for “voice over internet protocol”, put simply, this means you are able to talk on the phone with only an internet connection, and bypass the expensive phone companies all together.

While companies such as Vonage have been using this technology for some time now, it is just starting to gain popularity over the past year or so. In fact, all the phones in my office are VoIP phones, and I save a bundle every month. Another big benefit of this technology is you are not limited by your geographic location choosing what phone company you can use. With wired phones, you are restrained by who has available phone lines in your area. With internet phones you can connect anywhere, to any number, at any time. END_OF_DOCUMENT_TOKEN_TO_BE_REPLACED

Many of the most destructive viruses are hatched via unknown email spread. The infamous “MyDoom” virus was spread this way, and caused almost $40 billion in damages. It is also believed that this virus had the ability to infiltrate other programs as well, which made completely removing the virus a tedious and nearly impossible task. It also opened up your computer to be able to be accessed by others . It was spread by creating a fake ’email was not sent properly’ sort of message. Once it was opened, it sent itself to every contact that it could find, which made it very harmful, and very quick moving. END_OF_DOCUMENT_TOKEN_TO_BE_REPLACED

Many of our clients come to us with issues regarding their email. There are a lot of things that you can do to avoid even having to give us a call about something that is supposed to be so simple. Back when emails first started, it was a lot like texting is now. You get excited because you know that that email is from a friend or family member who is trying to tell you something. Now it’s more like a portal for spam.

Emails are not designed to be a storage unit for years and years of your electronic conversations. You should try to empty your inbox on a regular basis to cut down on the amount of unnecessary data slowing down your system. There are many ways to  go about making your email your friend, and not your annoying kid brother, you just have to know the right Orlando IT company. END_OF_DOCUMENT_TOKEN_TO_BE_REPLACED

You pay your employees to work, right? If you are saving money by using circa 2003 computer equipment,  it might be a good idea to opt for an upgrade. The less time your employees are waiting for something to load, or something to be fixed, the more time they are spending getting work done. Also, if you are backed up to a quality server, there is less of a chance of hardware failure, and that means less downtime.

Now I’m not saying go out and spend thousands upon thousands of dollars on top of the line equipment (It’s a better idea to lease anyway). But I am making a logical connection between up to date equipment and employee work completion rate. Companies that are based around computers and the internet should really take this advice to heart. Not only will you be taken less seriously on dinosaur age CPUs, but you’ll see a substantial increase in turnout, and employee overall moral. After all, who wants to strain their eyes on a CRT monitor when there are plenty affordable LCD displays on the market? END_OF_DOCUMENT_TOKEN_TO_BE_REPLACED

Having employees working away from the main office presents its fair share of natural problems. Especially if your company is computer based, it’s crucial to make sure that everyone working remotely is connected to a main data base to ensure proper execution of tasks. There are also many other obstacles to overcome to properly run a company where a number of the employees work remotely. END_OF_DOCUMENT_TOKEN_TO_BE_REPLACED